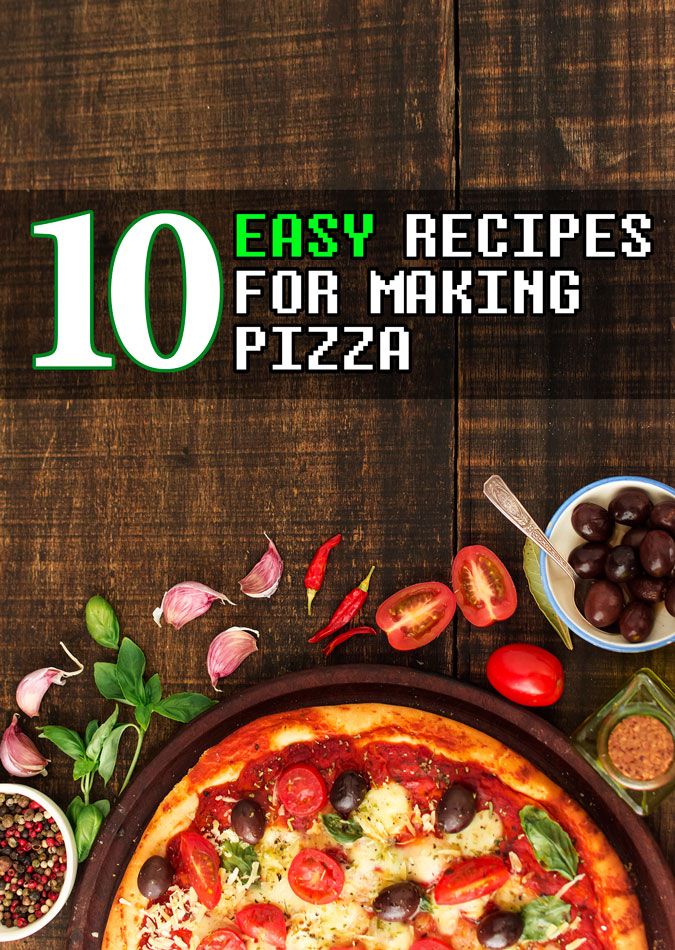 So you’re looking for easy recipes for pizza. Cooking pizza is a great adventure! Not only you have complete liberty to customize your pizza to no end by choosing what crust, sauce, and toppings you want, you also can use such a large variety of ingredients it’s overwhelming.

That said, it could be said there’s a certain level of skill needed depending on what crust, sauce, or toppings you’re using. Some need more skill than others, and when you’re in a hurry or you’re a beginner in the field of pizza-making, it can get rather daunting.

Don’t forget to read our article about pizza-making for beginners! We have a nice amount of tips you’ll find useful.

So what kind of recipes could be considered “easy”? This depends on what you’re trying to make. An easy dough recipe is rather different than an easy toppings recipe. A sauce recipe that needs more preparing than most could be considered easy by many standards. All in all, in this article we’ll consider the ‘easy’ factor in all the parts of the pizza, and give you a few recipes you’ll be able to enjoy pizza with.

After all, when it’s about life and cooking, the only thing stopping you from acquiring skill is practice! Practice and you’ll see improvements after a while!

Some may say making good homemade pizza dough is difficult, and that it’d save you a lot of hassle if you buy premade pizza crusts. It’s true, to some extent. Getting the perfect homemade pizza dough can be difficult. However, it’s a matter of practice, to get a grip on how much of each ingredient you need to use. Should you add more flour next time? More salt? Perhaps the crust was too thick? It’s the kind of element you need to finish before you can decide what improvements it needs.

Not many dough recipes could be considered easy, all things considered. The easiest recipes would be those that use only the most necessary ingredients and needs the dough to rest before being used. In some ways, these recipes aren’t too different from dough recipes for bread or some kinds of pastries, so if you have experience with that kind of food, you’ll find you’ll have an easier time than most.

Here are a few dough recipes that may be considered on the easier end of the spectrum. Let’s stick to the all-purpose flour, yeast, and warm water!

Our Basic Homemade Pizza Dough recipe is the most basic easy recipe for pizza you’ll find. Pretty much all dough recipes out there improve or add ingredients to this one, so you can consider this specific recipe a safe bet when it’s about pizza crust. All you need is time, you don’t need much experience before you can try making this dough.

Now, maybe you’ll want a thicker or a thinner crust for your pizza. Maybe you like cracker-thin crusts, or you have many toppings in mind so you decide a thick crust would work better. In that case, try these options:

By following this recipe created by Stacey at Bake Eat Repeat you’ll get a thin crust. You may notice the ingredients list is rather similar to the basic homemade pizza dough recipe we linked earlier. To get a thin crust, all you have to do is make some small changes in the way you make the dough.

Stacey has a few tips you should follow to ensure great results. For example: “it’s easiest to stretch the dough using your knuckles, stretching slowly with the backs of your hands (well-floured) – but if that seems too tricky, you can also just roll it out with a well-floured rolling pin”. Usually, rolling pins are frowned upon when it’s about pizza crust unless you’re looking for thin crusts, like in this case. As you can see, Stacey knows what she’s doing!

Doesn’t that crust look delightfully thick? Look at that width! This crust is going to hold any topping you want to use; you can be certain of that! Of course, all the easy recipes for pizza will do well on this crust.

Here’s the link to the recipe. Keep in mind this recipe is posted on a bread and flour brand website, just so you know. It doesn’t make the recipe any less great, though! And as you’ll notice, there aren’t many changes in the ingredients list. See? Almost all pizza dough recipes use a basic template as its base! It’s all a matter of how you make it, pretty much!

Luckily, making a good homemade pizza sauce is rather easy. It’ll be rare to find a sauce recipe that requires extensive skill or complicated procedures – as long as you have a saucepan and possibly a good food processor, you’ll be prepared to make a good homemade sauce.

To ensure you have recipes that you can make even if you’re a complete beginner, we won’t stray from the use of tomato sauce. Sauces such as pesto or sauces that replace the tomato can be for later, for when you master the basics of pizza sauce cooking!

Here are a few sauce recipes that may be of use to you:

Just like we did in the dough section, here’s the most basic tomato pizza sauce. You could consider it the safe bet when it’s about the sauce, and although there’s no such thing as a ‘base’ for pizza sauces, you’ll find most sauce recipes use tomato, garlic, olive oil, and salt and sugar.

This recipe from TheKitchn has fewer ingredients, but it’s just as good. It’s also fast, and can be summarized in one single instruction: “Combine all the ingredients in a medium bowl”. No simmering!

Unlike with the pizza dough, you won’t have much difficult branching into variations of the tomato sauce. For example, how about you try a marinara sauce? It’s not too different from the base tomato sauce! It’ll be quite a nice touch!

Two factors could be used when labeling a pizza recipe as ‘easy’: number of toppings, and how much cooking or baking they need. In this section, we’ll strive to give you some recipes with toppings that won’t require much preparation – and therefore not only are easy, but quick to make.

We’ll suppose you already have your dough and sauce, whether they’re homemade or store-bought. Without further ado, here are some recipes that’ll be of use to you!

The Margherita pizza is by far the easiest recipe. It’s simple, very known, and only has two main toppings – three if you count the basil. It’s the perfect recipe to get started with pizza-making! You could use this recipe to get a grip on how to bake a pizza, as it’s rather low-risk. As long as the cheese has melted and the crust doesn’t burn, you’ll have a nice, delicious Margherita pizza.

Another easy recipe without many toppings is the Red Bell Pepper pizza. You could consider it a variant using the Margherita as a base, given the list of ingredients is rather similar, with bell pepper as the main addition. You also can experiment with other sauces, for example, a spicier kind of tomato sauce. Overall it’s a recipe you shouldn’t have much trouble with, which is why it’s in this article of easy recipes too.

The addition of meat usually means a level of increase in skill. To ease you into the use of meat ingredients, there’s always the Pepperoni pizza. Through that link you’ll get the most basic version. All you have to do is follow the instructions and keep an eye on the pizza while it’s baking, to make sure the crust doesn’t burn.

This recipe from TheSpruceEats. As you can see, it’s a pizza where the ingredients are bacon, lettuce, and tomato. Still rather easy, in terms of the use of meat and vegetables. The recipe list shows half of the ingredients needed are these toppings, while the other half is seasoning. Everything is rather easy to obtain! And it’ll all go smoothly as long as you follow the instructions, like with any other recipe. Give it a try!

Coming from the Taste of Home magazine, here’s a Grilled Sausage Basil pizza! It uses a different kind of crust – crust you can obtain premade, so you don’t have to worry about making it yourself – few ingredients, and a method of cooking that isn’t the oven. It’s this nice combination of simple yet introduces some new elements for you to practice on. It’s perfect for the jump into the learning curve!

That said, when it’s about pizzas you should never be afraid to tackle challenges. Don’t let this article make you think you should stick to ‘easy’ recipes for too long, if you want to try something then go ahead, try it! Practice makes perfect, but there’s only so much you can do with the basic recipes before you have to branch out. Trust your instincts, try your best, and enjoy the food you make.

So what are you waiting for? Let’s start preheating the oven and start making a pizza!