If you’d like a bitter touch for your pizza crust, making it with beer may do the trick! Here we have a recipe for a beer pizza dough!

The result will be a crunchy, thick crust if done correctly. It’s certainly worth it, and will give your pizza that flavor that’ll make you wish you had tried this recipe much earlier. It’ll be great!

Making this dough will take a few hours, so you really should make it in advance. Don’t worry, this dough can last a few days in the fridge — but it’s a good idea to use it as soon as possible. Everything that’s homemade is better when it’s fresh! 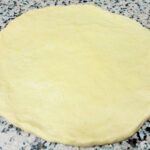